Is Bleeding Normal After Colposcopy?

If your doctor discovers issues or abnormal cells during a pelvic examination or Paps test, she may recommend a colposcopy. The colposcope allows the healthcare professional to observe specific changes in the cervical and vaginal tissues that are not visible otherwise.

These include aberrant blood vessels, tissue shape, colour, and patterning, to name a few characteristics. Cells that seem abnormal but are not yet malignant may be referred to as “precancerous” by your healthcare practitioner. These aberrant cells may be the initial indicators of cancer, which may develop years later after the abnormal cells are discovered. If the doctor suspects abnormal tissue during a colposcopy, she will collect a tissue sample for additional investigation.

In most cases, patients are worried about the bleeding after a colposcopy. To know about it in detail, read this blog till the end.

How much bleeding is normal after colposcopy?

If your doctor performs a biopsy, it is typical to have a modest quantity of rectal bleeding after a colposcopy. But if it is significant (amounting to more than one-half cup), you should see your doctor immediately.

How long does it take for your cervix to stop bleeding?

Your cervix will usually heal within 4 to 6 weeks after having the procedure (colposcopic biopsy) performed. Take care of a few things within the first 24 hours after the procedure like:

You may have vaginal discharge that looks and feels similar to menstrual bleeding for the first four days after your procedure. You need to know that:

If you have any procedure performed with colposcopy like biopsy you’ll have to wait 4 to 6 weeks following the operation or until your doctor says your cervix has healed before you can resume normal activities. Remember to:

Moreover, make an appointment with your doctor to follow up on your treatment. It should be about four weeks following your surgery if everything went according to plan.

What stops bleeding after colposcopy?

Following the colposcopy, you may notice a black discharge from your vaginal area. If your gynecology doctor conducted a biopsy sample during the colposcopy, a thick yellow paste is applied to the biopsy site to control the bleeding and prevent infection. When this paste comes into contact with blood, it may form a black fluid (discharge). Following the operation, it is typical to have some discharge for several days afterwards.

Noticing some bleeding is normal, but if it is significant, consult the doctor immediately.

Will a colposcopy affect pregnancy?

It is the opinion of doctors that having a colposcopy performed should not affect one’s fertility or chances of becoming pregnant in the future. Even if a biopsy is required, the quantity of tissue removed will be so tiny that it will make no difference in the outcome.

Can a colposcopy biopsy cause miscarriage?

In most cases, colposcopy biopsy does not result in miscarriage. Doctors perform Colposcopies throughout pregnancy and even in the early stages of pregnancy. It should not result in a miscarriage unless a vigorous endocervical scraping is performed.

What should you not do after a colposcopy?

You should avoid inserting anything into your vagina for at least one week after your colposcopy until your doctor has given you the go-ahead. Your cervix, vagina, and vulva all need time to recover. Do not use a vaginal douche or apply any vaginal medications.

As soon as your monthly cycle begins, switch to sanitary pads instead of tampons or a menstrual cup to avoid uncomfortable situations. Do not engage in sexual activity or introduce sex toys into your vaginal opening.

After a colonoscopy, you may wash and bathe as you normally would. Exercising and engaging in physical exercise are also acceptable.

Normally, a person can bleed after a colposcopy for at least 6 weeks after the procedure. However, if heavy bleeding lasts for a longer length of time than normal, it is important to consult a colposcopy clinic. In such cases, antibiotics are prescribed by the doctor since the occurrence is the consequence of an infection in the body.

To know more about colposcopy in detail, book an appointment with our experts today. What is the Difference between PCOD vs. PCOS? (In Details)

Are PCOD and PCOS relative terms? Lots of women are confused about the difference between the two, often using the wo... What Age is Best For IVF?

The problem of maternal age has become a major social and medical concern in recent years. Increasingly, women are de... Endometriosis is a condition in which tissue comparable to a woman’s uterus lines develops outside the uterus.<... The first successful IVF baby was born in 1978. Since then, IVF has helped millions of couples to conceive. 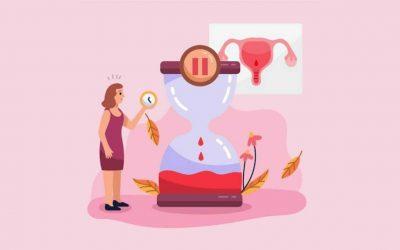 Should I Worry About Post-menopausal Bleeding?

When you reach the age of 45 or above and haven’t had a period in a year, you’ve entered menopause. If y...